I’m being facetious when I suggest that Kanye “approved” this message or breakout Gap Inc (NYSE: GPS). However, his affiliation with the clothing company has created a significant amount of momentum in the last month and Wednesday’s breakout is a continuation of what was started on June 26, but the addition of PopSugar to the Old Navy line-up is adding more fuel to the fire.

The partnerships that the company is creating is a testament to the fact that they have lost their way on design. Gap was once an iconic store where people got their basics. The Old Navy brand has helped drive the company in recent years and their online platform, but clearly, they needed something more to find the consumers they lost years ago. While this model may not be perfect, it may serve to make them relevant again. 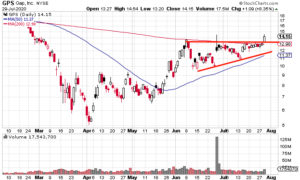 Since reaching it high near $13.75 on June 8, the company has formed a similar high on June 26 and consolidated near the resistance over the past couple weeks. Over that same period, the price has formed a succession of higher lows that culminated in Wednesday’s breakout on higher volume.

This pattern is called an ascending triangle and is a continuation pattern of the previous upward trend from the April low. The pattern provides a target and a timeframe for the projected bullish move. The measured move is the drop in price from the June 8 high of $13.75 to the June 11 low of $9.66. The nearly $4 move is then added to the resistance level of $13.75 for a potential target of $17.75. That target would carry the price back to where it began at the beginning of the year.

Option traders may want to consider an 18 SEP 20 $13 call option for around $2.40 or less. If the option gains 30% or more, consider rolling it a higher ITM strike to remove risk.